Three Reasons to Believe in Your Work

"Disneyland! That's the answer." (Fiction 101 -- Drop your reader into the action immediately.)

My wife and I went to Disneyland recently. The trip was fun, of course, but it was also a revelation. Suddenly, Nancy turned to me and said, "The essay you are working on for Writers in the Storm! This is it! Disneyland!" It was winter; the heat couldn't have addled her brain, so I said, "Yes, of course. Um, go with that thought, darling." (Marriage 101).

She had me look around. The streets are spotless. The cast is uniformly courteous and friendly. People who work there care about the park. Everybody takes what they do seriously. She's right. So should you.

I want to tell you a story, the story of the very first time I was invited to speak to a women's book club. I walked in -- not sure what to expect, just hoping they'd read the books -- and the very first question was (spoiler alert) "What would T. R. Macdonald have done about his girlfriend Kandi if his wife Diana had still been available?"

Of all the things I might have been asked, this was one I hadn't expected. My temptation was to say, "Ladies, these are characters, constructs that are in the book because I put them there. They have no life outside of the pages you read."

I didn't say that and I'm glad, because they deserved a better answer. And because I would have been wrong.

That was my first lesson in how important what we do is and why we need to take it seriously.

One: Your fictional characters deserve it.

I think I was in the fourth grade when I wrote my first story, about a little boy who rescues a stray puppy that has become trapped in a drainpipe just as a rainstorm begins. I cared about that puppy; I wanted to know if he survived. In modern terms I invested emotional capital in him.

I write genre fiction, like most of you, but it's about something, people and relations, always. That book club didn't care about the details of sinking a supertanker off the Orange County coast; they cared about the people.

Two: Your readers deserve it.

At Disneyland you will never see trash littering the ground. Disney felt that his guests deserved a clean place. You are asking readers for several hours of their lives as they find out who did it or if true love will conquer all. They deserve your best shot.

Three: You deserve it.

This is the flip side of reason number one. When you are finally done, you have invested a lot of time in your work. Not quitting, going the distance, is good for you after its done. To remove any doubts, watch the opening of "Romancing the Stone" as the Kathleen Turner character finished her novel. You will be happier, and more likely to step up to the plate for the next work, if you have given it your all. Okay, okay, I hear you out there and you are right. I have never looked at any of my stories in print without thinking that I could have done something better. That doesn't mean I haven't given it my all.

So, there are at least three reasons why, like any cast member at Disneyland, you never walk past a piece of trash, why you give every piece of work your best effort.

-- your characters deserve it

-- your readers deserve it

I want to close with examples from two different art forms, and from extreme ends in terms of popularity or fame. First, one most of you know -- the Thomas Harris novel Red Dragon. If you haven't read it, do so. Just don't read it late at night by yourself. Heh heh. This is from the Introduction to the electronic edition of Red Dragon. And if you want to see how a really, really good writer goes about this craft, read it.

Harris talks about working on the novel late at night in a remote farmhouse, alone, except for one of his creations, or maybe not. I'll let him tell it:

I was enjoying my usual immunity while working, my invisibility to Chilton and Graham and the staff, but I was not comfortable in the presence of Dr. Lecter, not sure at all that the doctor could not see me.

Harris has made Hannibal Lecter real to million of readers; this makes it clear that the good doctor was real to Harris as well, God help him. Harris invested in learning about the man; and it shows in the work.

And from the other end of the spectrum, we have "The Hideous Sun Demon." It's a 1950's b&w movie about a scientist who is exposed to a lethal dose of radiation. He survives but the bad news is when he goes out in the sun he turns into a lizard creature and kills people. I think it's a documentary. In the essay that comes with the DVD the director talks about wearing a wetsuit and how hot and uncomfortable it was. There is a still picture of the actor wearing the Sun Demon costume where so much sweat has run down into his pants that he says it looks like he uh, had an accident. Again, he put out the effort.

Both of these people -- one a famous author creating a novel with a lock on the NY Times bestseller list, the other a little-known actor making a movie to fill a drive-in screen while teenagers drank beer and necked, cared about their work, and it shows. You should, too. Never be afraid to, like Rocky Balboa, "Go the distance."

Oh, my book club appearance. Well, like Hannibal Lecter watched Harris, T. R. Macdonald and Kandi, and yes, Diana, were watching me and whispering in my ear, and they allowed me to explain what probably would have happened.

A couple of weeks ago I went to a dinner with high school classmates. One of the women who organizes these things told me she had heard from one of us who is living out of state. In his email he said he was sorry he couldn't attend. He also said he was reading my first novel, the one the book club read, and that it meant a lot to him.

He lost his wife not so long ago.

I almost didn't include that. It's personal, cuts close to the bone.

So I am writing this to say if you are at a rough spot in your WIP, take heart. Invest the effort.  You're in good company.

Now, please tell us how you have invested in your work, and how it has paid off. I need to hear it, and so does everybody else. 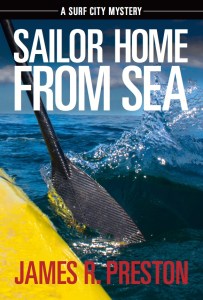 James R. Preston is the author of the award-winning Surf City Mysteries. His books have been selected for inclusion in the California Detective Fiction Collection at the Bancroft Library, one of the libraries at UC Berkeley. James’ novella, Crashpad, will be published soon by Stark Raving Group. See bookxy.com for more information.

James recently appeared at Men of Mystery in November at the Irvine Marriot.

The newest Surf City Mystery is Sailor Home From Sea.

15 comments on “Three Reasons to Believe in Your Work”